We do Community Plantings and other Civic Projects throughout the year for our town of Glastonbury. Here are the most recent projects that we have participated in:

Evergreen Country Gardeners worked with GPIP and members of other Glastonbury Garden Clubs to add live greenery to the newly expanded Welles Turner Memorial Library for the Grand Re-Opening Celebration on September 17th 2022.  Garden club members, worked with the Library to arrange for donations and loans of fall mums, and other plants to beautify interior spaces of the Library on the day of the re-opening celebration.  plants were loaned by Draghi Farms, Littel Acres Farm, GHS Agri-science Department, garden club members and the Library Re-opening Committee members.

Club members organized and participated in a floral design workshop for the “Red Hat Ladies” at the Glastonbury Health Care Center.  A club member donated an assortment of decorative tea cups and saucers and members assisted residents with assembling petite floral arrangements in the tea cups.  The event was enjoyed by residents and club members alike. The club is planning return engagement over the holidays.

RIVERFRONT COMMUNITY CENTER – Landscaping Project
Glastonbury’s Riverfront Community Center was built in the early 2000’s. By 2018 the original
landscaping in front of the building was overgrown and appeared unhealthy. Working with
Glastonbury’s Parks and Recreation Department Country Gardeners funded the renovation of these
plantings on both sides of the front entry. Some original shrubs were replaced with similar but more
compact varieties that would remain medium in size thus not covering the windows. Spring flowering
bulbs and different plant material were also added. The landscaping will continue to be maintained by
the town. A sign recognizing Country Gardener’s funding of the renovated landscaping has been placed
beside the community center’s front entry. 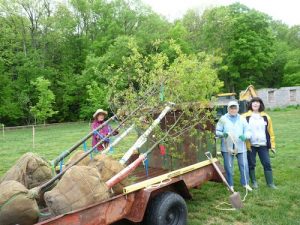 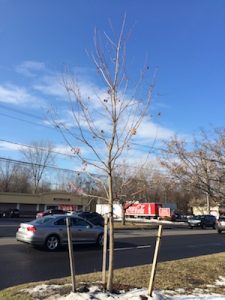 Over the years, several of the trees along the north end of Glastonbury’s Main Street had died or were in poor health.

During the Spring of 2017, Carole Fromer, the club’s Conservation and Horticulture co-chair, contacted Glastonbury’s Beautification Committee, and a representative of the town’s Park and Recreation Department, to determine how to improve the appearance of the area. She found that Glastonbury Partners In Planting (GPIP) was willing to donate nine large trees for the project, but there was no money to dig them up or to have them planted.

Carole spearheaded an effort to raise nearly $3200 from local businesses, community organizations, and garden clubs to fund the rejuvenation of the area. The money raised paid for digging the trees, and for having them planted by General Landscaping in the fall.

In the future, the town will care for the trees, and the beauty of Glastonbury’s main corridor will be improved.