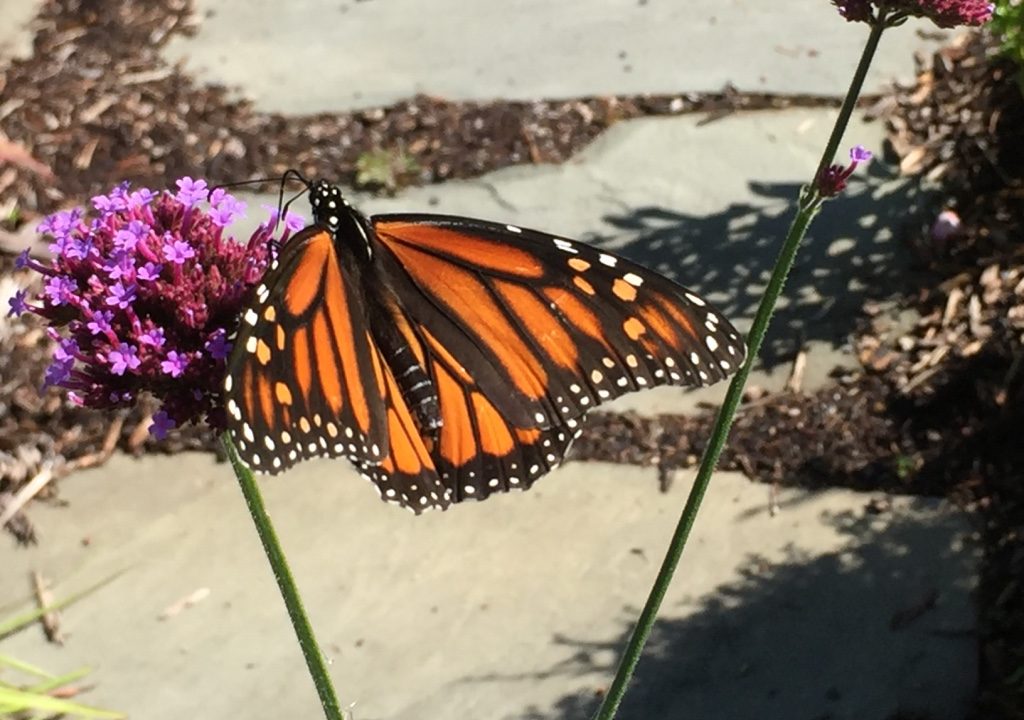 After years of dire reports about the decline of the monarch butterfly population, fans of this gorgeous insect now have at least a glimmer of good news: monarch numbers may once again be on the rise in Connecticut.

An annual one-day butterfly count conducted by volunteers in the Farmington River Valley sighted 63 monarchs on July 22-23 – the highest total since 2008.

Two years ago, the Connecticut Butterfly Association’s count found no monarchs at all, and just eight were spotted in 2016.

“It’s very good news,” Jay Kaplan, a member of the butterfly association who participated in the most recent Farmington River Valley count, said of the number of monarchs spotted. “But this is just one year,” he cautioned.

“You can’t go on a one-year total and think everything is great,” said Kaplan, who is also director of the Roaring Brook Nature Center in Canton. “This could be a one-year blip.”

The butterfly association’s annual count has been happening for 20 years and covers the same 15-mile radius covering all or portions of Avon, Simsbury, Canton, Farmington, West Hartford, and Burlington. Kaplan warned there is no way of knowing if this year’s count was an anomaly, or the start of a trend indicating the striking orange-black-and-white butterflies may be starting to recover.

Kaplan can recall times several decades ago when naturalists could see hundreds of monarchs migrating past on a single day. And reports from the monarch’s “overwintering” sites in northern Mexico for 2016-17 haven’t been encouraging.

The dramatic decline of this colorful creature has conservationists worried, because the monarch is considered an “indicator species” of the health of our environment. State and federal officials and environmental groups across the U.S. are campaigning to help save the monarchs.

At the Kellogg Environmental Center, volunteers are participating in a long-running effort to monitor monarch numbers and reproductive success. Jenny Dickson, a state wildlife biologist, said Connecticut’s environmental agency is now “looking at how we can manage habitats to make sure they are a lot more monarch friendly.”

Major national efforts are being made to plant or preserve more milkweed and other native plants along the monarch’s migration routes. Milkweed is considered a key food source for monarch caterpillars, and plans call for planting hundreds of millions of milkweed in the next few years.The Kellogg Center study covers “a couple of acres” of fields in neighboring Osbornedale State Park, according to Susan Quincy, an environmental educator at Kellogg.

They also record the temperature in direct sunlight and shade, record the stages of growth on the caterpillars they find, note the density of milkweed plants, count any adults, and check for a type of aphid that feeds on milkweed and deters monarchs from laying eggs.

Many scientists believe the monarch’s decline is the result of factors that include loss of winter habitat, climate change, and agricultural practices involving pesticides, herbicides and genetically modified crops that have significantly reduced the butterfly’s natural food sources, primarily milkweed.

Monarchs migrate thousands of miles every year, reproducing as they travel, from the northern U.S. to spend the winter in a small area of sheltered mountain valleys in Mexico. In the spring, they fly north. During their northward migration, a monarch will typically live two to six weeks, but monarchs born in late summer can survive through a winter to start the next year’s migration north.

In 2016, a study published in the journal Scientific Reports reported that the past two decades have seen the eastern monarch butterfly winter population plunge by 84 percent, down to perhaps 33 million.

The study by a team from the Scripps Institution of Oceanography and the U.S. Geological Survey warned that there is now a “substantial probability” that the eastern monarch will go extinct unless this decline can be reversed. The fear is that the monarch may be headed toward “quasi-extinction,” a term experts use for a species when there are too few individuals left to ensure reproduction.

“This is a species we are watching very closely,” said Jenny Dickson, a wildlife biologist at the state Department of Energy and Environmental Protection.

Monarch butterflies are not on DEEP’s threatened or endangered species listings for Connecticut. But Dickson said those lists are scheduled to be updated in the next couple of years, explaining that her agency will be evaluating the local and regional status of the butterfly and ways to help it.

How to Avoid Spreading Infections Between Your Plants While Pruning

Have you ever wondered how you can avoid spreading nasty infections from one of your plants to another while you are pruning them?

Simply wipe your shears off with a household disinfecting wipe. Alternatively, you can use a solution of 50% isopropyl alcohol and 50% water. Dip your tools in the water solution and allow them to air dry, or wipe them thoroughly.

That’s it! Simple, yet effective.